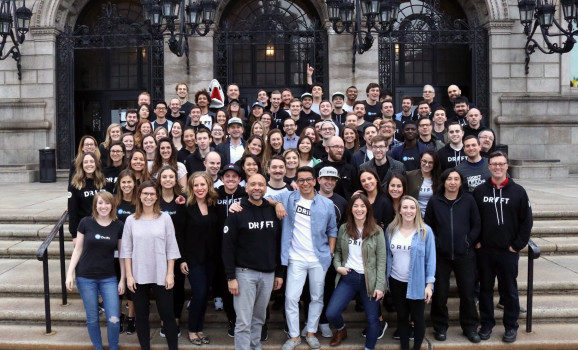 Drift today announced it has raised an additional $60 million to grow its conversational sales and marketing platform. To date, the maker of sales assistant Driftbot has raised a total of $107 million. The company will use this new funding to invest in its customer chat and automation platform, expand outside the United States, and explore the acquisition of other companies, CEO David Cancel told VentureBeat in a phone interview.

The round was led by Sequoia Capital, with participation from General Catalyst and CRV.

“We’ll probably start to look at — in the near-term — any acquisitions or any kind of acquiring companies or technology. I don’t know if we’ll make one or not, but we’ll be hungry to look at stuff we hadn’t looked at before,” Cancel said.

Drift will consider the acquisition of voice or video companies or others whose services can improve its current offerings.

Launched in April 2016, Drift is currently being used by more than 100,000 businesses, according to a company statement, up from 40,000 last September. Drift began with bots dedicated to chat with customers in web browsers and chat apps like Facebook Messenger, and, in a story told exclusively by VentureBeat, expanded its marketing automation tools to email.

Drift’s headquarters is in Boston, and a $32 million founding round last September helped the company expand to offices to San Francisco. The latest funding round will be used to expand teams in Boston and San Francisco and open new offices in parts of Southeast Asia or northern Europe.

About 30 percent of Drift customers are outside the United States, Cancel told VentureBeat.

The money will also be used to explore additional avenues for the deployment of automation for sales and marketing, like voice apps and video, as well as in-person events to “capture things happening in the real world.”

“There are still physical interactions that are happening, and those are still important from the buying process,” he said.

“Our focus at Drift is this idea of how [to] become the new way that businesses buy from other businesses,” he said.

Sequoia Capital, General Catalyst, and CRV also invested in Drift in prior funding rounds. Other investors include HubSpot, which contributed $2 million to the funding round last fall.

Drift currently has 130 employees, a company spokesperson told VentureBeat in an email.