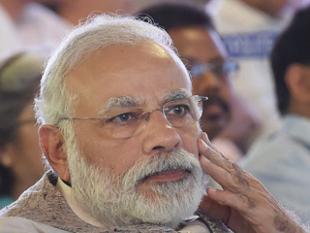 Economists are betting that India has seen the back of the impact of its unprecedented cash ban, prompting foreigners to pour in investment that’s crucial to help bridge a widening current account deficit.

Deutsche Bank AG estimates that foreign direct investment touched $37.4 billion April-January, on track to exceed the previous fiscal year’s about $45 billion, with signs of recovery after a plunge late last year as the U.S. prepared to tighten policy and India announced demonetization. Overseas investors’ holdings of Indian stocks and bonds have also picked up, rising more than $8 billion in 2017.

While Asia’s third-largest economy is forecast to grow at one of the fastest paces in the world, Prime Minister Narendra Modi needs this money. Domestic private investment is slumping and the central bank’s shift to a neutral policy stance makes it unlikely to recover soon. Meanwhile U.S. President Donald Trump’s threatened crackdown on immigration risks further slowing service exports and remittances, key revenue earners for India.

The shortfall in the broadest measure of trade widened to $7.9 billion in October-December from $3.4 billion the previous quarter, data showed last week. However this was smaller than the $12 billion gap estimated in a Bloomberg survey, as a smaller trade deficit offset a drop in service exports and remittances.

Ever since its current account deficit ballooned to a record in 2013, Indian policy makers have been trying to shrink the shortfall and safeguard the economy from global swings. Finance Minister Arun Jaitley in February proposed to get rid of a bureaucratic barrier to FDI and the government says India is now one of the most open economies in the world.

Foreign-exchange reserves jumped $2.7 billion in the week to March 17 — the biggest increase since September 2016 — to $366.7 billion, Reserve Bank of India data showed on Friday. The rise comes amid speculation the central bank has been intervening to mop up dollars and prevent a sharp appreciation in the rupee.

Modi may be comforted by the recent stabilization in global oil prices after a brief rebound, economists say. The goods and services tax, scheduled for July, is expected to simplify compliance, boost revenue and make it much easier to do business in India.

“We expect reforms in the FDI space to continue which, along with the focus on improving ease of doing business conditions and GST implementation should help to sustain the positive momentum in the period ahead,” said Kaushik Das, Mumbai-based senior economist at Deutsche Bank.

India’s $2 trillion economy is forecast to grow 7.1 percent in the year through March, though that may be downgraded once there’s more clarity on the impact of the cash ban. There’s also the risk that food prices will jump in the nation of 1.3 billion as global reflation picks up and the U.S. tightens policy.

For now though, investors are attracted to India’s growth potential and the rupee, which is forecast to earn investors 2.6 percent by March 2018 — including interest — the second-best in Asia after Indonesia’s rupiah.