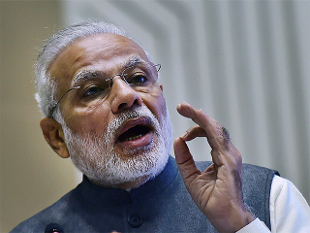 NEW DELHI: Prime Minister Narendra Modi on Monday promised to reduce the disparity in the energy access by the rich and poor in India.

Inaugurating at the Vigyan Bhawan here the Petrotech 2016 oil and gas exhibition, the Prime Minister said that his vision for the future of energy sector was to focus on access, efficiency, sustainability and security.

“In India while on one hand rich are buying hybrid cars, poor buy firewood, bringing health hazard to the rural women. Our focus is to reduce that disparity,” Modi said.

He said India needs energy which was accessible to the poor.

Stressing on the need to increase domestic production and reduce oil imports by 20 per cent by 2022, the Prime Minster urged the youth to venture into the oil and gas sector.

“We need to find out an affordable and reliable source. youth should venture into this sector and find innovative ways for India’s oil security,” Modi said.

“We are committed to replacing red tape by the red carpet,” he said.

Stressing on energy accessibility and energy security in India, Modi said that his government was working to ensure that every village in India got electricity by March 2018.

Over 300 million people in India do not have access to electricity.

“Amid the global uncertainties, India needs energy security,” he said.

Modi said that “energy in general” and “hydrocarbon in particular”were important part of his vision for the future of the sector.

“India will consume more oil in 2040 than the whole of Europe… transport infrastructure is expected to increase many fold..

“We will be third largest market in civil aviation by 2034 and demand of civil fuel will increase four folds,” the Prime Minister said.

He praised the Indian economy for being one of the rare stable ones while uncertainty looms over many developed countries, Modi also called for India’s global commitments to climate change and emission reduction.

Union Petroleum and Natural Gas Minister Dharmendra Pradhan who opened the inaugural session called the oil and gas sector as emerging vehicle for socio-economic change in the country.

The Petrotech-2016 Exhibition would see the participation of about 600 exhibitors from over 50 countries. The exhibition is scheduled from December 4 to 7, at Pragati Maidan