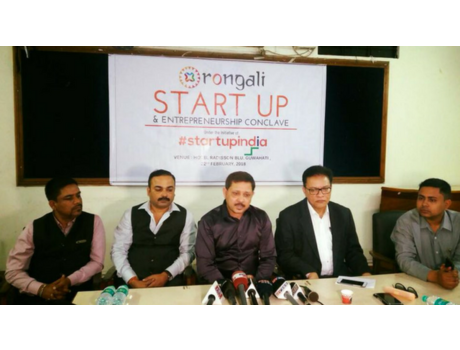 Rongali Start Up and Entrepreneurship Conclave, a daylong conclave aimed at creating an ecosystem for entrepreneurship and start up in the northeast India, is being organised at Hotel Radisson Blu on the 22nd of February.

An initiative of Rongali, the conclave is the brainchild of Shyamkanu Mahanta, who himself left a job to start his own venture and is currently running a project management company. The conclave aims to showcase Assam as a destination for tourism by bringing young minds of the region face to face with some of the finest mentors, investors and venture capitalists from all over the country.

To encourage the budding entrepreneurs of northeast region, iconic entrepreneurs including Dr Nomal Borah of GNRC, Abhijit Barooah of Premier Cryogenics and Basant Khetan of Kaziranga University will share their entrepreneurial journey during the conclave and entertainment entrepreneurs like Tarsame Mittal and Zubeen Garg will interact with the audience and present their story to them.

Addressing the media at a press conference held in Guwahati on February 19, Monday, Shyamkanu Mahanta said, “Around 400 bright and aspiring entrepreneurs from Assam and northeast will be attending the conclave and around 150 students from various colleges and universities of the State have been selected to present their entrepreneurial ideas during the conclave.”

Rongali Start Up and Entrepreneurship Conclave will be inaugurated by Naveen Verma, Secretary of DoNER and will be attended by Ravi Capoor, Additional Chief Secretary of Government of Assam, PVSLN Murthy and Utpal Bora among a host of other dignitaries. The closing cerenmony will be attended by Minister of Industries and Commerce Chandra Mohan Patowary.