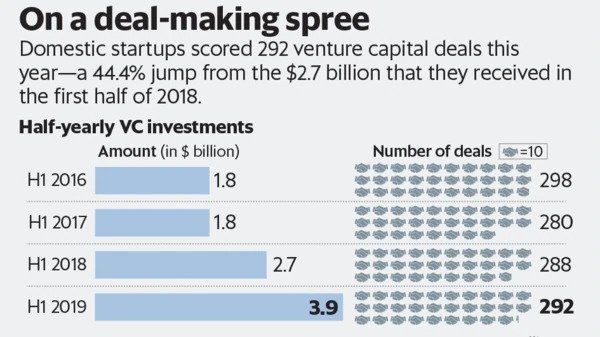 Deal-making has also broadened, across companies and sectors, moving away from a few large companies such as Ola, Paytm and Flipkart

Startups in India have raised a record $3.9 billion from venture capitalists in the six months ended 30 June, as the world’s biggest investors doubled down on their bets in the country buoyed by the Flipkart-Walmart deal last year.

The investments this year across 292 deals is a 44.4% jump from the $2.7 billion received by domestic startups in the first half of 2018, showed data from Venture Intelligence, a startup data tracker.

The investments in 2019 are also comparable to the full-year investments of $4.2 billion and $4.3 billion in 2016 and 2017, respectively, indicating the surge of capital allocation in the past six months.

The data defines venture capital investments as seed, or very early investments, to Series F deals in companies that are less than 10 years old.

Terming 2018 a turning point for the market, Sandeep Murthy, managing partner at Lightbox Ventures, said “many companies that have been quietly building and solving truly unique problems have achieved scale”.

“They are now being rewarded with capital that will allow these businesses to continue to grow… in many cases profitably,” said Murthy, whose fund is an early backer of online furniture rental startup Furlenco and cloud kitchen firm Rebel Foods, best known for its Faasos brand.

While consumer internet firms have been continuing to raise large amounts of capital, business-to-business (B2B) companies in sectors such as logistics, software and marketplaces are also raising money now.

Murthy said “2019 has also been about the emergence of Tier II and III cities and B2B models, both of which had been historically underinvested in”.

“Tiger Global has clearly indicated their interest in the B2B space, while Chinese investors seem to be pushing deeper into emerging cities across India,” he said.

“Post the Flipkart exit, there is an increased confidence in the India market that you can get large outcomes and get liquidity. Till then there were always questions on whether money from India will come back or not. Flipkart investors made a healthy return and are investing again,” said Mukul Arora, partner at SAIF Partners, an early backer of Paytm, BookMyShow and Swiggy, among others.

“We started seeing investments in late-stage tech becoming very aggressive, following which growth stage, series B and C deal-making also got aggressive. Now that is rubbing off into early-stage deals as well,” said Arora.

Mint reported on 2 June that startup funding has seen a late-stage boom, with more deals of $100 million or above in the first five months of this year than in the first half of the last two years.

Deal-making has also broadened, across companies and sectors, moving away from a few large companies such as Ola, Paytm and Flipkart that used to top fundraising charts every year.

To be sure, valuations have risen in recent times, making some investors cautious, but most have been able to see gains stemming from firms despite higher valuations.

“I do believe valuations have gone up, not just at the top end of the market for large rounds, but also at the earlier stages… As an investor, I would rather pay a slightly higher price for a higher quality business than get a bargain valuation for an inefficient company,” said Murthy at Lightbox.