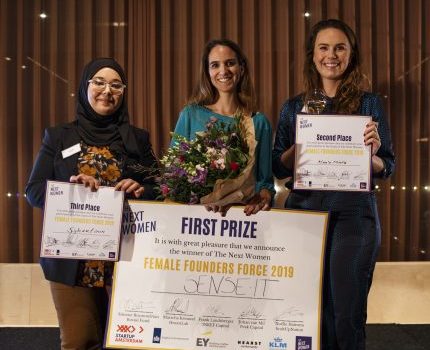 Tamar Schapira of SenseIT was declared the winner of the final of the Next Women Female Founders Force Program on 19 December 2019. She received the prize from Peter Potman, Deputy Director General of Foreign Economic Relations at the Ministry of Foreign Affairs during the Hearst HQ event.

Tamar Schapira will gain access to a network of more than 150 investors, an EY Growth Navigator and a potential place in the HearstLab in Amsterdam. The Next Women mission is to set up exposure, valuable knowledge and connections for female entrepreneurs. For startups with a female (co-) founder, they have set up the seventh edition of the international Female Founders Force Program this year.

Previous finalist raised € 1 million in funding
This year, more than a hundred women-led startups signed up for the program. The previous finalists CafeDeco, FEST Amsterdam, Plugify and MT Art raised funding between five hundred thousand and one million euros, within nine months of the final. It is the seventh edition of the program, organized in collaboration with various embassies and corporate companies.

The Next Women is an international movement of ambitious women and their companies. They help them with growth programs, network and funding. Information: https://thenextwomen.com