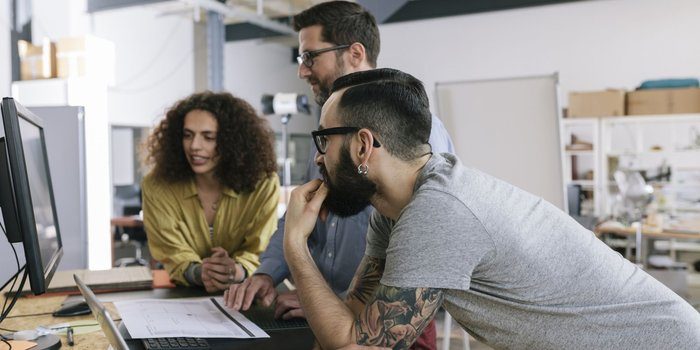 From its humble origins in the Gutenberg Press to today’s latest online iteration, mass information and by extension content, is now an intricate part of most people’s daily lives.

According to a survey conducted by Pew Research Center, a record number of Americans carry smartphones in their pockets. And as for the content that streams to those devices: Well, just a few major players actually determine the bulk of what we see and when we see it.

Those players’ names, of course, are familiar: Google, Facebook, Instagram (owned by Facebook), YouTube (owned by Google), Snapchat and several other social media platforms. And clearly these are companies not especially challenged by your (or anybody else’s) small entrepreneurially spirited startup, regardless of how good your content is. But fortunately, … the landscape is changing.

For entrepreneurs, the evolving content landscape presents an unparalleled opportunity for success, one ripe for disruption as even small players seek to challenge the dominance of the world’s largest tech giants. Here are three reasons why:

Netflix also effectively bankrupted BlockBuster with its (Netflix’s) model and now has around 148 million subscribers, according to the Netflix Q1 shareholder report. Similarly, YouTube became — still is — a kind of front-page video platform for the internet, attracting more than 1 billion users — as the platform boasts on its press page — and consistently churning out viral content featuring big-name celebrities.

These platforms’ success has reigned supreme for several years but is set to face some stiff competition. For example, Disney, as the New York Times reported, recently unveiled its streaming service, Disney Plus, to much fanfare. And this is hardly just a side project for the iconic company. “We are all-in,” said Disney CEO Bob Iger.

In a letter attached to its Q1 report, Netflix remained unfazed by the Disney announcement, writing, “We don’t anticipate that these new entrants will materially affect our growth.”

Still, Netflix will have to contend with Disney’s daunting lineup of Marvel, Pixar, National Geographic, Star Wars and other Disney content that the latter company is vigorously working to claw back the streaming rights to. Arriving on November 12 and costing $7 per month, Disney Plus is going to present some formidable competition.

However, the larger narrative that emerging competition like Disney Plus reveals is that there is still plenty of room for innovation, competition and fragmentation in what was a market historically dominated by a few major service providers.

Having more avenues for streaming content creates new opportunities for small players, like the entrepreneurs seeking to provide multi-channel video a service like Maker, which the Times reported was acquired by Disney for $500 million.

Additionally, as the younger generations continue to cut their cords to what their parents watch, smaller streaming services in niche content areas, like Vice Video, may become more common. The services may not compete with the likes of Netflix or Disney, but they can tackle more narrow categories with the kind of refined twist that many users are looking for as opposed to mass-audiece content.

This brings us back to YouTube, whose controversial position on pleasing advertisers has often led to friction within its community of content-creators. Considering the wide range of content offered on YouTube, it is unlikely that challengers will arise who seek to beat the giant at its own game. Rather, they will likely improve upon YouTube’s shortcomings — factors like revenue generation, payments and subscriptions (See No. 2).

For example, LBRY is a marketplace for digital content run on a blockchain. As an open protocol, LBRY lets content creators post videos and earn subscribers just as they can dp on YouTube, but the revenue model isn’t based on ads. Instead, content creators generate revenue on a pay-per-click or pay-per-view basis using the native LBC token.

Content creators receive 100 percent of the revenue, with no middlemen taking a hefty cut. YouTube monetization, in contrast, is based mainly on user engagement with ads. And people like Jeremy Kauffman, founder and CEO of LBRY, oppose that model. As Kauffman explained to me by email, “Platforms like YouTube pretend to be on your side, but in reality, they are a prison. On any of these platforms, as a creator, you don’t have followers — the platform has users who follow you.” (italics added).

Early iterations of web-based payments using Bitcoin’s Lightning Network are already gaining traction. For example, according to PR Newswire, one of YouTube’s biggest stars, PewDiePie, recently signed on with a similar “no middlemen” streaming service: DLive — based on the Lino blockchain — to regularly live-stream content.

These are intriguing developments but don’t expect immediate big changes: A future of micro-payment-based internet paywalls may be a few years away; but the opportunity for entrepreneurs to innovate at the edge of crypto paywalls and new content platforms is clear.

Building censorship-resistant content mediums — and ones that are decentralized — will become more and more a priority, as these resources are a potent defense against the negative outcomes of centralized information control.

As initiatives like Google’s censorship engine for the Chinese government — as explained by Wired — begin to cause more friction with mainstream observers, look for a broad scope of opportunities for entrepreneurs to create the next-generation of BitTorrents in content creation, distribution and streaming.

Certainly, major tech companies present daunting competition, but their stumbles in the areas described here can be odiously misaligned with privacy and freedom of expression. That’s why such scenarios are indicative of a glimpse into a new paradigm of content distribution for the future internet.

Many people may consider building in the shadow of tech giants an insurmountable task, but when did “insurmountable” ever stop entrepreneurs from innovating?