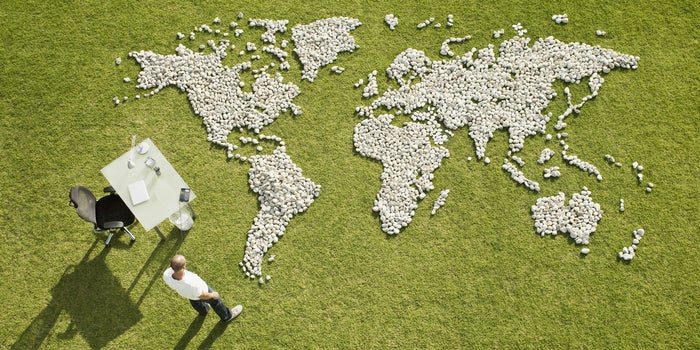 The internet has completely changed the way we conduct business — including the way startup founders hire employees: A study reported by CNBC found that worldwide, 70 percent of all business professionals surveyed said they work remotely at least once a week. Fifty-thee percent said they spend at least half the week telecommuting.

These numbers far outpace the telecommuting market here in the United States, where, while the number of people who telecommute has risen dramatically, research from Global Workplace Analytics reveals that a mere 3.2 percent of Americans work from home for at least half of the week.

And that doesn’t reflect the big picture, because, given the internet’s globalization possibilities, startups are no longer limited to hiring people who work in those startups’ immediate geographic area. The possibilities for remote work mean you can hire someone from almost anywhere in the world. By taking your talent search overseas, you can achieve a greater ROI from your hires.

Here are the reasons why you should do this:

Talented, driven individuals can be found in practically every country. Expanding your search to find qualified people from other countries to fill open positions in your startup could result in getting more work accomplished in the same amount of time — or less.

2. You’ll be better prepared to enter foreign markets.
Many startups have an eye on entering foreign markets — and for good reason. A study by Deloitte revealed that small-to-medium-sized businesses that export to foreign markets experience an average of 70 to 100 percent higher revenue per employee when compared to non-exporters. However, it isn’t easy to ensure a successful entry into a new country. Language and cultural barriers can present significant challenges for companies attempting to provide quality service to a new market.

Alex Iliescu is CEO of mondlyWORKS, a platform that enables business owners to create a language learning environment in the workplace. In an email exchange, Iliescu discussed the importance of having a team that can speak the language of new markets.

“Our modern global economy requires that you have multilingual employees,” Iliescu told me. “The moment your business opens its doors in a foreign market, you’ll have to deal with emails, phone calls and in-person meetings in a language other than your own.

“Fostering an environment where you and your employees learn to communicate to customers in multiple languages will allow you to deliver higher-quality service and make a positive first impression.”

3. You’ll encounter advantageous wage expectations.
Prices for consumer goods and cost of living vary dramatically throughout the world, and as a result, so do wage expectations. More often than not, salaried workers in the United States earn much more than their peers around the world.

For example, an overview of software developer salaries compiled by Daxx revealed that while the average developer salary in the United States is over $107,000, developers in countries like Canada and Australia earn an average ($U.S. equivalent) $48,000.

This isn’t to say that you should use this as an excuse to underpay workers hired from overseas. However, by paying a more competitive salary than domestic businesses can provide, you will engender loyalty to your company. This will allow you to retain the best talent more easily than you would if you hired only domestic employees.

4. You’ll gain new (and exciting) perspectives.
Cultural diversity has consistently been found to be a major asset in the workforce, for large corporations and new startups alike. Diversity of all types — cultural, ethnic, racial, gender, etc. — gives startup founders perspectives that can help them better understand their target audience. These additional insights are often a key driver in innovation.

Indeed, survey data from Talent International regarding Australian companies revealed that “Diverse teams are nine times more likely to innovate,” with much of this advantage being a direct outcome of the fact that “Diverse teams are better suited to meet market demand because they represent varied backgrounds, experiences and values.”

Added the report: “They have a greater understanding of their customers’ needs and are representative of the communities that drive their profits.”

5. You may realize stronger financial returns.
Each of the these factors ties in to a consistent finding in studies of diverse workforces: The more diverse your team, the more profitable you will be. A study by McKinsey that evaluated hundreds of public countries in North America, Latin America and the United Kingdom found that, “Companies in the top quartile for racial and ethnic diversity are 35 percent more likely to have financial returns above their respective national industry medians.”

The less diverse a company in the study was, the less likely it was to achieve above-average earnings. This makes prioritizing diversity during your hiring process an absolute must.

Quite often, the easiest way to create an inclusive, diverse work environment is to hire talent from overseas. Qualified professionals who don’t look and think exactly the way you do will help drive growth in ways you never might have experienced otherwise.

Overall, the internet has made it easier than ever to expand your talent search to foreign markets so you can assemble the best possible team for your startup. As you look overseas to grow your team, your startup will be better equipped to make a meaningful impact in markets across the globe. You should start looking there today.