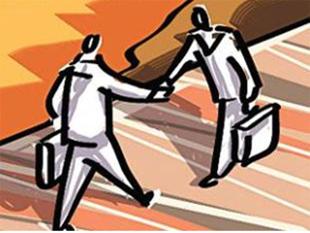 Energy is now at the vanguard of New Delhi’s biggest business commitments in its neighborhood, with power and gas leading the $9-billion investment projects India has proposed to make in Bangladesh to help strengthen Dhaka’s emerging industrial base.

The Reliance and Adani Groups, and power behemoth NTPC were among the Indian blue-chip companies that concluded investment proposals on Monday in the presence of visiting Bangladeshi Premier Sheikh Hasina to supply electricity, and enhance power generation in the easterly neighbour. Cross-border power connectivity has emerged as the key bridge of friendship between the two countries over the past few years.

An agreement between Bangladesh India Friendship Power Company Limited and EXIM Bank of India for debt financing of the construction of 1,320 mw Maitree Power Project in Rampal, Bangladesh was signed. The estimated value of the deal is $1.6 billion.

Reliance Power signed an agreement worth $1billion with Bangladesh’s power, energy and mineral resources ministry for the first phase (750 MW) of the 3000 MW power project at a place called Meghnaghat in Bangladesh. Adani Power Ltd. concluded an agreement to supply 1600 MW of power from its plant in Jharkhand to Bangladesh. This would involve a cost of $2 billion.

In what would be a key three-nation cross-border connectivity initiative, NTPC Vidyut Vyapar Nigam Ltd entered a preliminary pact with Bangladesh Power Development Board for supply of power from Nepal. The estimated value of the deal is $3.15 billion, according to an official statement. Both entities also signed another agreement for supply of additional 60 mw of power from Tripura to Bangladesh worth $138 million.

Three preliminary agreements related to cooperation in the field of liquefied natural gas (LNG) were also signed between Indian and Bangladeshi companies.

An agreement between Numaligarh Refinery Limited and Bangladesh Petroleum Corporation for sale and purchase of diesel was also signed.

NRL is the source for supply of high-speed diesel through the proposed friendship pipeline from Siliguri to Parbatipur in northern Bangladesh.

“India-Bangladesh trade and commercial ties, in tandem with our overall bilateral relationship, are on an upward trajectory. Our bilateral trade has registered a substantial increase over the last few years. Bangladesh is today India’s biggest trade partner in South Asia,” an official told ET, explaining the context behind the surge in Indian investments in the eastern neighbour.

Companies from both India and Bangladesh are also exploring new opportunities for investing and setting up joint ventures. Indian investments in Bangladesh cover a wide range of sectors, including textiles, pharmaceuticals, automotive, consumer goods and telecommunication.

Officials said both India and Bangladesh needed to create an enabling environment for respective business communities to tap these opportunities.

“First, we need to work on improving the investment climate and the ease of doing business in our respective countries. In India, we have made substantial progress on these two. The “Make in India” initiative and the attendant liberalisation measures and reforms launched by the government have made it easier to do business in India. We invite Bangladesh companies to take full advantage of this opportunity,” said an official. “Second, we need to promote economic integration and improve connectivity between our two countries. We have made tremendous progress on this in the last three years by establishing or improving cross-border trade, transport, telecom, cyber, and energy links.”

The presence of a 250-plus strong business delegation that has come from Bangladesh and the overwhelming response it has received from the Indian business community is a reflection of the potential that exists for further cooperation.