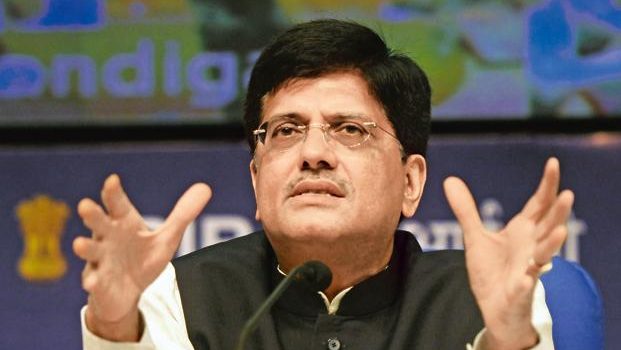 NEW DELHI: Green seems to be the catchword for the government heading into the next year as it gears up to achieve 175 gigawatt of clean energy by 2022 through auction of 1,000 MW of rooftop solar power, Rs. 13,000 crore investment in solar parks and a Rs. 21,000-crore package to boost local manufacturing of panels.

By all yardsticks, 2016 remains a watershed year when solar tariff slumped to Rs. 4 per unit and wind projects received a major thrust. The government is set to switch gears in 2017 to make India a hub for one of the largest installations of clean energy sources by 2022.

Minister for New and Renewable Energy Piyush Goyal offered a glimpse of things to come while speaking to PTI. Scaling up of rooftop solar programme, scheme to encourage domestic manufacturing of solar panels and making wind power affordable through auction of sites all fill up a packed 2017.

His ministry has in its sight Rs. 1 lakh crore investment for the sector and is looking at 20 GW of power generation from non-conventional sources in 2017-18.

Beginning with speeding up the tempo for solar panel installation at homes, schools and hospitals through subsidies in 2016, plans are afoot to expand the rooftop programme to government buildings by providing target-based incentives.

In the November auction of 500 MW, subsidies for installation of as much as 432.7 MW of rooftop solar capacity were lapped up by 122 developers. A fresh tender for one gigawatt (1,000 MW) is now in the works.

The Prime Minister Narendra Modi-led government is eyeing generation of 100 GW from solar power alone by 2022. Rooftop solar capacity almost doubled to 1,000 MW in 2016 and the aim is to take this to 40 GW.

Also on the table is a green corridor to transmit 2,000 MW of power from 34 solar panels across 21 states.

For good measure, Mr Goyal said, a scheme to promote domestic manufacturing of solar panels will become a reality in 2017. The Rs. 21,000-crore module aims to create 5 GW of photovoltaic manufacturing capacity by 2019 and 20 GW by 2026.

According to Mr Goyal, wind power is up next after successful reduction in solar tariff through transparent auction of sites. A mobility scheme is on the anvil to achieve 100 per cent electric vehicle-based transportation for India by 2030, he said without giving out specifics.

Early next year, the ministry will organise Global RE- Invest 2017 India-ISA Partnership, the second edition of the bi-ennial Renewable Energy Investors Meet and Expo to bring in investors. The event will build on RE-Invest 2015 and explore the advances to help meet India’s ultimate target of adding 175 GW renewable energy capacity by 2022.

The ministry is keen on fostering competition among players, particularly in the wind energy space, to bring down tariff and make it a viable source of electricity for consumers.

He spoke of launching renewable energy fund under the National Investment and Infrastructure Fund (NIIF). The ministry has been working on this USD 2-billion fund to make private players invest in the sector.

A total of 7,518 MW of grid-connected power generation capacity from renewable sources has been added this year (January to October 2016).

In 2016-17, a total of 1,502 MW capacity has come on board till October-end this year, making a cumulative realisation of 28,279 MW. Now, in terms of wind power installed capacity, India is placed at the 4th rank after China, the US and Germany.

As for solar power, a total of 1,750 MW capacity has been added till October-end this year, making it a cumulative 8,728 MW.

After bringing solar tariff to a record low of Rs. 3 per unit, the minister indicated making wind power affordable.

He said, “There will be a wind auction to transparently reduce the tariff.”

The government has planned solar energy from every roof in the country and there will be expansion of rooftop solar programmes next year. It has envisaged 40 GW of solar power from rooftop alone out of the total 100 GW planned to be added by 2022.

This flows from the need to push rooftop solar in a big way against the backdrop of a target of 40 GW grid connected solar rooftops by 2022. So far, about 500 MW of rooftop solar has been installed and about 3,000 MW has been sanctioned for installation.

All major sectors like the Railways, airport, hospitals, educational institutions, government buildings of central, state and PSUs are being targeted, besides the private sector.

A massive Grid Connected Solar Rooftop Programme will be launched with 40 GW target. State Electricity Regulatory Commissions of 30 states/UTs notified regulations for net-metering and feed-in-tariff mechanism. Besides, funding of Rs. 5,000 crore was approved for solar rooftops.

A total sanction of USD 1,300 million has been received from the World Bank, KFW, ADB and NDB which will enable SBI, PNB, Canara Bank and IREDA to fund such projects at an interest rate of less than 10 per cent.

The ministry has tied up with ISRO for geo-tagging of all the rooftop plants using ISRO’s VEDAS portal.

To reduce import of solar equipment from other countries, particularly from China, the ministry is keen to encourage domestic production to meet the huge power demand.

The minister said there will be focus on Make in India for solar power next year and a scheme to this effect may be launched. The government has also planned launch of founding conference of International Solar Alliance.

About use of renewable in farm sector, he said, “We will focus on Prosperous Farmer — Pollution Free India. There will be scheme for Bio-mass like rice husk utilisation next year.”

Major programmes such as implementation of solar parks, Solar Defence Scheme, have been launched during the past two years.

The increased use of indigenous renewable resources is expected to reduce India’s dependence on expensive imported fossil fuel.