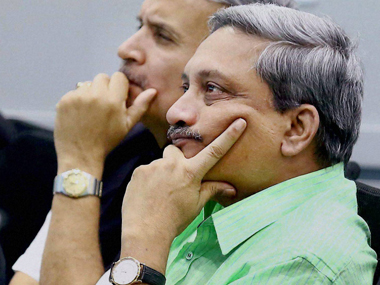 Panaji: Beer and petrol will soon cost more in Goa, even as chief minister Manohar Parrikar in his Budget presented on Friday, promised to make the state garbage-free by 2020, while creating 4,000 jobs annually in the IT sector and linking Aadhar card to all social welfare schemes.

Parrikar, who presented a Rs 202.48 crore surplus Budget, also lent a touch of compassion to the fiscal exercise by announcing the creation of social infrastructure as far as geriatric care and autism is concerned.

The Opposition however criticised the Budget claiming it had no vision, being anti-poor in nature and partial to constituencies represented by BJP MLAs.

Parrikar — a four-time chief minister who took over the reins of the state government earlier this month — in his Budget speech announced a hike in value added tax on petrol from the existing 12 per cent to 15 per cent.

“I propose to enhance the rate of VAT on motor spirit to 15 per cent. Even with this increase, the price of petrol will be in the range of Rs 65 per litre, which is substantially lesser than our neighbouring states,” Parrikar said.

VAT had been abolished in Goa in 2012 by then chief minister Parrikar, as part of a poll promise, but was hiked over the years.

Parrikar in his Budget, also announced that excise duty on locally manufactured and imported beer would be marginally enhanced.

The price of bulk litre of beer with alcoholic strength below five per cent and above five per cent has been hiked to Rs 20 and Rs 24 respectively.

Manufacturers of high-end hard liquor, who import concentrated alcoholic beverages will be levied an additional annual fee of Rs 1 lakh, according to a budgetary proposal.

Parrikar also said that since Aadhar card coverage in the state was nearly 100 per cent, in the coming days all social welfare schemes would be linked to the national identity card.

The former Defence Minister also said that he would formulate a policy to discourage cash-spending in Goa, adding that his government “will encourage digital payment and make it financially rewarding”.

The chief minister also announced that the state would be made beggar-free and garbage-free in the coming years.

“The aim of my government is to make garbage-free Goa by 2020 and the first step towards this would be to ban plastic below 40 microns completely from the state of Goa and heavy penalty will be levied on the seller as well as the user of these plastic bags,” he added.

The chief minister also said that autism complexes would be set up across Goa to cater to the population of 5,800 children suffering from autism.

Reacting to the Budget, Congress legislator and former chief minister Luizinho Faleiro said that it was anti-poor and lacked imagination and intent.

“They have raised the price of petrol, going against their own promise made earlier. They have also shown no imagination and vision and have instead listed promises which their previous government was unable to fulfil,” Faleiro said.

Leader of Opposition Chandrakant Kavlekar said that constituencies of ruling MLAs who could not be accommodated as ministers, had been given special grants in lieu, calling it splurging of money.

“This is loot. They have given special grants to municipalities in constituencies whose BJP MLAs could not be inducted in the cabinet. This government does not believe in all-round development,” Kavlekar said.