The rise of the robots? 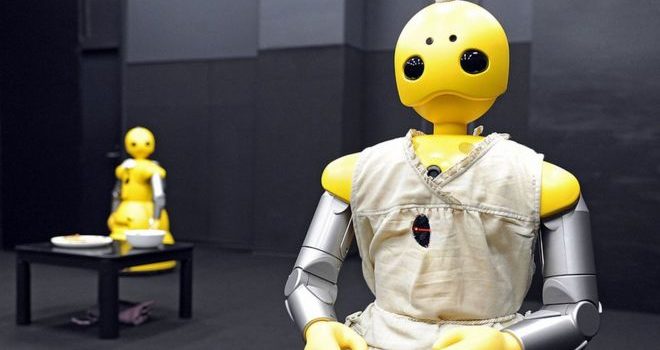 “Your bones will turn to sand. And upon that sand a new God will walk.” Dolores in the latest sci-fi TV blockbuster, Westworld.

It may not quite be that bad. But a wall won’t keep them out, a new work permit scheme won’t stop their freedom of movement.

The rise of the robots could be next year’s big story. Ever since the Luddites smashed their first loom, mechanisation has been putting people out of work. But the process is speeding up, accelerating all the time and the next wave could be crashing down, near you, soon.

A variety of new technologies, at their heart, advanced robotics and better, faster, brighter computers. Most agree that it is not yet the “general intelligence” which might lead to the (so far fictional ) ethical conundrum about machine consciousness.

But increasingly complex machines are now doing more and more jobs which used to require human brains, as well as still replacing brawn power, a subject which we have covered a number of times on The World This Weekend.

3D printers eliminate jobs in both manufacturing and transportation. Driverless cars are around the corner, driverless lorries just behind the next bend. Scary when you consider the claim that “truck driver” is the most common job in many US states.

Indeed, researchers say nearly half of all current jobs in the USA will be automated by 2033. Typists and clerks went long ago. Next may be highly-educated people who work in marketing and medicine, law and, yes, journalism.

Spare a thought for the bankers, too. The president of the Boston bank State Street, Michael Rogers, employs more than 30,000 people. He thinks by 2020 one-in-five of them will be put out of work by an algorithm, according to this article.

Experts have been talking about the fourth, (or fifth) industrial revolution, the third wave of globalisation and their disruptive technology for several years now.

What is different is the political context. There’s a new question.
What will this new economic jolt mean, coming hard on the heels of the revolt of the Rust Belt, the bellow of the left behinds?

You might have noticed that 2016 was quite a year, here, and in the States. All the signs are it will continue in 2017 in Europe with elections in Germany, France, the Netherlands and probably Italy. Many see it as nothing less than a rising up of the dispossessed.

If there are coherent themes, some of them are about nationalism and identity. But so are economic dislocation and a growing sense of inequality.

One respected economist argues this will get a lot worse. Prof Richard Baldwin predicts, among other things, that “hotel rooms in London could be cleaned by people driving robots sitting in Kenya or Buenos Aires or wherever, for a tenth of the cost here.”

He has a simple view of people’s political reaction – “Boy, are they going to be angry!”

Politicians have this year recognized the first wave of that anger. The trouble is, beyond walls and trade barriers, they have few solutions to deal with rising inequality. More worryingly nor do thinkers and policy makers.

The former chief economic adviser to Vice President Joe Biden wrote recently: “As long as we’re being honest, we must admit that neither side (Democrat or Republican) has a strong, convincing plan to restore high-value added jobs to the many communities that have lost much of their manufacturing base.”

He adds: “I’ve studied this problem for years and don’t have anything like a complete answer.”

The IMF’s chief economist advocates “trampolines” as well as safety nets – policies which bounce people into new jobs. But the new jobs have to exist first. It is not clear that they will.

People have been talking about the importance of skills and training for decades – and it doesn’t seem that successful or dynamic – British industry is short of the most basic, most obvious skills, from IT to builders.

Consider this observation. We are desperately short of GPs, many hospital doctors are from outside the UK and yet there is fierce competition to become a doctor – only the very, very brightest kids, who get at least three top grade A-levels, seem to have a chance. Something, somewhere, doesn’t seem to be adding up.

Perhaps it is time for some blue sky thinking. Some of the solutions are rather exotic. One which has caught my eye is FALC – “Fully Automated Luxury (or Leisure) Communism”.

The basic argument is that everything we need will soon be produced so cheaply, that we can all have lots of it – if only the current owners don’t hog all the profits for themselves.

Some left wing thinkers are much gloomier – worrying that these trends will end in a war on the poor – the literal extermination of workers.

“Robot” – first used by a sci-fi author – is merely the Czech word for “serf”. Under FALC we all own the product of their labour, guilt-free slave owners. As they say in The Culture: “Money is poverty”. Post-scarcity societies don’t need it.

It depends, of course, on who owns the robots. It would also mean a revolution in the way we look at work.

A less radical version of all this is a citizen’s wage or universal basic income. This means everybody gets a basic wage, whether they are working or not. President Obama is evidently attracted to the idea. So is Labour’s John McDonnell.

This may go against the spirit of the age. The voters’ anger with their economic circumstance is frequently tangled up with the complaint that the elite are mollycoddling the undeserving, whether domestic scroungers or immigrant workers.

A plan to dramatically increase welfare provisions to all-and-sundry, from feckless billionaires to the work-shy underclass, might not prove politically popular.

Nor is there any real sign that life on “basic” would be any more satisfying, ennobling or less divisive than life on the dole. It seems there are no easy or obvious solutions to either the revolt of the Rust Belt or the coming rise of the robots.

But here is a New Year’s resolution. A promise if you like. I will do my best on the programmes I’m involved in and on this blog to push to look at solutions, whether they are blue sky, black sky, mainstream, wacky or weird.

It took us the bulk of my working life for many politicians to wake up to the fact that the end of the old industrial era would have serious consequences for everyone. Let’s not wait so long to think about a future that is just around the corner.